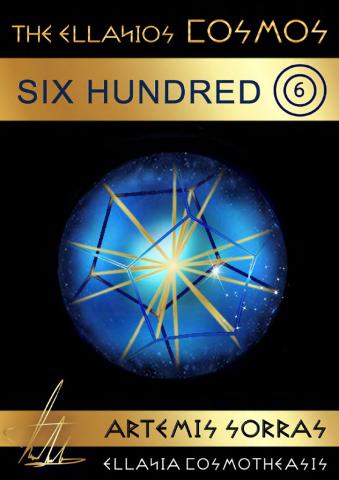 This Sacred Ellanio Text, written by Artemis Sorras during his imprisonment in Korydallos prison, is a Text of sacred knowledge containing all the information about our Cosmos whose cosmic code is the number 600 “Six Hundred”.

What is our Cosmos 600? It is the Wholeness that contains “infinite of Infinity” universes, galaxies, solar systems, planets as well as the entire creative environment and nature where the humans will create with their 12 Values: Logic, Freedom, Virtue, Justice, Equality, Abundance, Truth, Harmony, Aesthetics, Valour, Eudaimonia and Know Thyself.

Through the pages of this Text, we see the structure of our Cosmos 600, which is composed of 12 pentahedron pyramids that are united right at the 13th unity point and center of our Cosmos 600, creating its dodecahedron foundation.

Artemis Sorras presents the magnificence of our Cosmos 600 with numerous geometric shapes and analyses, characterised by mathematical precision. This is shown especially when he introduces us to the 600 gateways of our Cosmos that create infinite syntheses of cosmic frequencies, which all participate in the structure and creation of absolutely everything.

As we continue, we perceive the arithmetical and geometrical greatness of our Creation, through the 27 symbols of our Ethereal Script as well as the fundamental “A-rithmetic” of 1, 2, 3, 4, 5, 6, 7, 8, 9, 10, 11, 12, 13 which are the “rhythm” of the beginning (Alpha) and the end (Omega), but also the end and the beginning of a creational cycle of Infinity, where everything is created perfectly with universal Laws and Oaths. Everything is secured and protected within the Immortality of our infinite Cosmos.

All of this has been created for the Diamond, the “Jewel of all Cosmoses” – the Human, whose Soma (Body) is structured by 12 parts, exactly like the Cosmos 600 with its dodecahedron synthesis. Consequently, we realise with the eyes of our Nous (Mind) that we are the Cosmos 600, and every time we look inside the cosmic mirror of Creation, we see our Cosmos 600. Everything is reflected with perfection, where the Creator acknowledges its creation (Human) and the creation recognises its Creator, where both become one and the same.

The only thing that the writer of this Sacred Text asks from all of us, is to remember who we truly are and take a stand for the truth of our Creation, life and existence within the Infinity of our Cosmos 600. Through the observation (The-a-sis/ΘΕ-Α-ΣΗ) of our Cosmos, we will restore our rightful position (The-sis/ΘΕΣΗ) within its magnificence, ascending ourselves towards the Divine (The-o-sis/ΘΕ-Ω-ΣΗ) of our Alpha – Omega Creation, Theogony and 12 Creators: Dias, Hera, Artemis, Athena, Hermes, Demeter, Apollo, Hephaistos, Aphrodite, Ares, Hestia and Poseidon.

Sorry, the comment form is closed at this time.