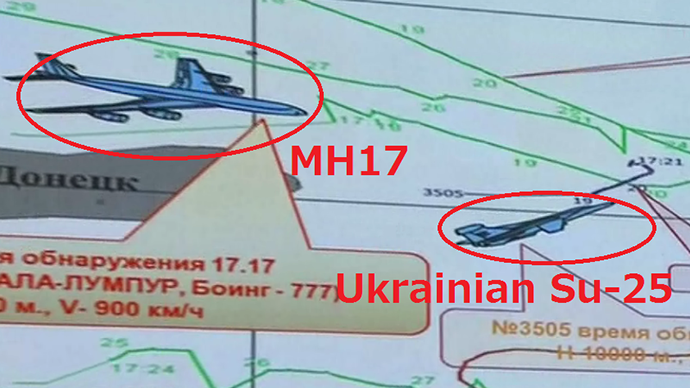 The Russian military detected a Ukrainian SU-25 fighter jet gaining height towards the MH17 Boeing on the day of the catastrophe. Kiev must explain why the military jet was tracking the passenger airplane, the Russian Defense Ministry said.

“A Ukraine Air Force military jet was detected gaining height, it’s distance from the Malaysian Boeing was 3 to 5km,” said the head of the Main Operations Directorate of the HQ of Russia’s military forces, Lieutenant-General Andrey Kartopolov speaking at a media conference in Moscow on Monday. 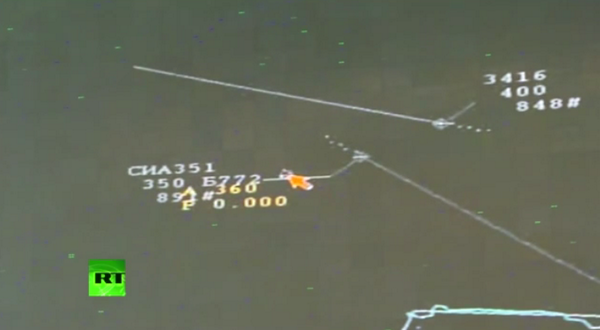 “[We] would like to get an explanation as to why the military jet was flying along a civil aviation corridor at almost the same time and at the same level as a passenger plane,” he stated.

“The SU-25 fighter jet can gain an altitude of 10km, according to its specification,” he added. “It’s equipped with air-to-air R-60 missiles that can hit a target at a distance up to 12km, up to 5km for sure.”

The presence of the Ukrainian military jet can be confirmed by video shots made by the Rostov monitoring center, Kartopolov stated.

At the moment of the MH17 crash an American satellite was flying over the area of eastern Ukraine, according to Russia’s Defense Ministry. It urged the US to publish the space photos and data captured by it.

“We have space images of certain places where the Ukraine’s air defense was located in the southeast of the country,” Kartapolov noted.

The first three shots that were shown by the general are dated July 14. The images show Buk missile launch systems in about 8km northwest of the city of Lugansk – a self-propelled vehicle and two launchers, according to the military official.
Another image shows a radar station near Donetsk. Radar stations of the air defense in Donetsk Region, 5km north of Donetsk city, on July 14, 2014.Photo courtesy of the Russian Defense Ministry

While the third picture shows the location of the air defense systems near Donetsk, he explained. In particular, one can clearly see the self-propelled system, about 60 units of military and special equipment, he elaborated. “Images from this area were also made on July 17. One should notice that the missile launcher is absent [from the scene]. Image number five shows the Buk missile system in the morning of the same day in the area of settlement Zaroschinskoe – 50km south of Donetsk and 8km south of Shakhtyorsk,” the Kartapolov said The question that has to be answered is why the missile system appeared in the area controlled by the local militia forces shortly before the catastrophe, he stated.

Images taken on July 18 show that the missile systems left the area of the MH17 crash on July 17, the military official said.

Kartapolov also pointed to the fact that on the day of the plane crash Ukraine’s military increased the intensity of the radar stations of the Buk missile systems.

In response to Moscow’s evidence, Kiev said on Monday it had proof the missile that brought down a Malaysian airliner last week came from Russia.

“There is evidence that the missile which struck the plane was fired by terrorists, who received arms and specialists from the Russian Federation,” spokesman for Ukraine’s Security Council Andrey Lysenko told a news conference. “To disown this tragedy, [Russia] are drawing a lot of pictures and maps. We will explore any photos and other plans produced by the Russian side.”