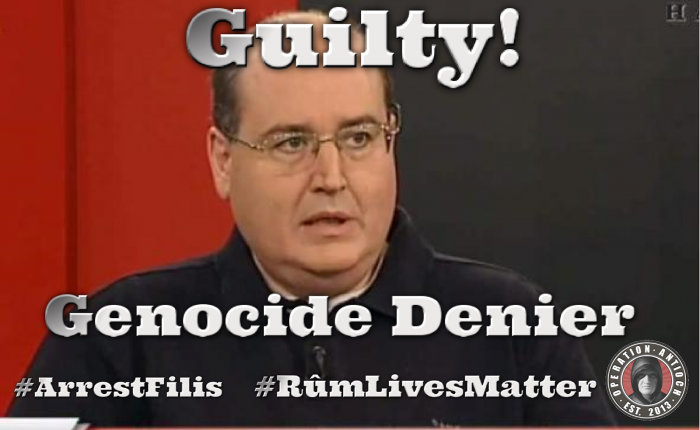 ACTION ALERT: #ARRESTFILIS
For Immediate Release – November 5th, 2015
from e-mail : Operation Antioch
On Monday night, Greek politics hit an old time low. When Greek Education Minister Nikos Filis denied the events of the Ottoman Greek (Rûm) Genocide in the Black Sea coastal region of Pontos on Greek national television. A member of the ruling Radical Left SYRIZA party, Minister Filis has defended his comments. While the Greek Government has been quick to express that they are merely the Minister’s “opinion” and not the position of the Government.

For those unfamiliar with the Ottoman Greek (Rûm) Genocide. It was a systematic extermination by two consecutive Turkish Governments during World War I. This Internationally recognized event witnessed the mass murder of over 1.7 million Ottoman Greeks (Rûm) from the greater regions of Eastern Thrace and Asia Minor. Ottoman Greeks (Rûm), which were members of both the Greek Orthodox Patriarchate of Constantinople and Antioch.

In solidarity with our ethnic kin in Greece. Operation Antioch joins Greek-American Activist, Ioannis Fidanakis, in publicly calling for the arrest of Greek Education Minister Nikos Filis. We urge all Greek citizens living abroad to contact the Hellenic Ministry of Foreign Affairs. While those living in Greece are urged to contact the Areios Pagos. Those of us without Greek citizenship are asked to flood the social media accounts of Minister Nikos Filis and Prime Minister Alexis Tsipras.

For more information on what is happening to the ethnic Greeks of the Levant
http://operationantioch.blogspot.com

Learn more about the organizers of Operation Antioch
http://daimonesofhellenism.blogspot.com