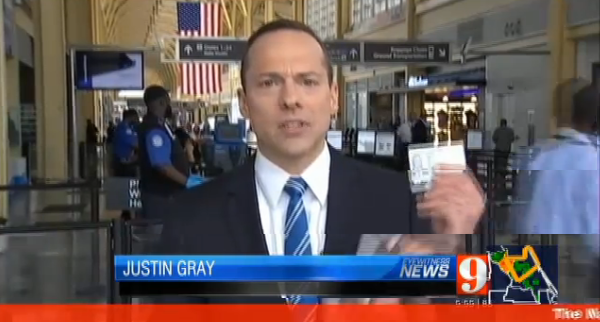 It’s something most students learn in elementary school — the United States is made up of 50 states and the District of Columbia. But Channel 9’s Justin Gray found out it’s a lesson that an Orlando agent with the Transportation Safety Administration seems to have missed.

Gray, who lives in Washington, D.C., was flying out of Orlando International Airport when a TSA agent said Gray’s District of Columbia driver’s license wasn’t a valid form of identification. Gray said his license is legal and up-to-date, but the TSA agent didn’t seem to know what the District of Columbia was when Gray arrived at the security checkpoint over the weekend.

When Gray handed the man his driver’s license the agent demanded to see Gray’s passport.

Gray told the agent he wasn’t carrying his passport and asked why he needed it.

The agent said he didn’t recognize the license.

Gray said he asked the agent if he knew what the District of Columbia is, and after a brief conversation Gray realized the man did not know.

Gray was able to get through security and then stopped to complain to a TSA supervisor.

Critics of the TSA said that what happened to Gray is a sign that the problems at TSA are bigger than just not knowing geography.

“They simply have not been either applying or maintaining standards for good personnel,” said Douglas Kidd, with the National Association of Airline Passengers.

A TSA spokesman contacted Gray just minutes after he tweeted about the problem. He confirmed that a District of Columbia license is an acceptable form ID.

The spokesman said, “Officers are trained to identify fraudulent documents, which can potentially deter and detect individuals attempting to circumvent this layer of security.”

“It makes you wonder what’s going on with their training and their policies,” said Kidd.

A TSA spokesman told Gray that all of the TSA agents in Orlando are being shown copies of District of Columbia driver’s license.

It’s easy to forget the limited voting rights afforded to District of Columbia residents. One TSA agent however has gone a step further, questioning the existence of the US capital.

Justin Gray, a resident of Washington, DC, was flying out of Orlando International Airport over the weekend when a Transportation Security Administration agent claimed his up-to-date District of Columbia driver’s license was not a valid form of identification.

The TSA agent, Gray said, asked to see his passport upon inspection of the DC license. Gray said he did not have a passport with him because he didn’t need it in this case.

Gray soon realized the agent did not seem to know just what the District of Columbia was, refusing him passage at the airport’s security checkpoint.

Gray, a reporter for Cox Media Group, was eventually let through the checkpoint after he was contacted by a TSA spokesman just minutes after he tweeted about the ordeal.

The spokesman explained the incident, saying, “Officers are trained to identify fraudulent documents, which can potentially deter and detect individuals attempting to circumvent this layer of security.”

A TSA spokesman told Gray that all TSA agents in Orlando are being shown copies of a District of Columbia driver’s license.

Another DC resident was reportedly held up by a Phoenix TSA agent in February.

“I don’t know if we can accept these,” DC resident Ashley Brandt recalled the agent saying, given DC is not a US state. “Do you have a US passport?’

Brandt’s license was quickly approved by a TSA supervisor, she said.